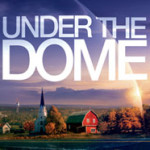 Under the Dome returns on Monday, June 30th.