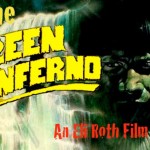 Eli Roth has launched a mobile game based on his upcoming The Green Inferno, in theaters September 5.

The movie follows a group of student activists who from New York City travel to the Amazon to protect a dying tribe, but crash in the jungle and are taken hostage by the very natives they saved.

The game, which is absolutely free on both iTunes and Google Play – starts in the jungle, after a big plane crash, where we find eight survivors surrounded by ravenous opponents. Your objective is to protect the crew from furious hordes of enemies. Conquer the jungle with different strategies, using various types of traps and weapons!

For Justine and the remaining survivors, no good deed goes unpunished.
There’s an interesting story behind the game as Roth collaborator Nicolas Lopez started a video game company with his brother and programmer friends called Nanai.

We’re told to expect more games based on Roth’s films in the future.