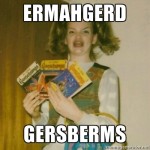 When all the many demons of Stine’s mind are set free by Slappy, a demonic ventriloquist’s dummy, it’s up to Minnette’s character and Stine’s niece Hannah (Odeya Rush) to put all the evil genies back in the bottle.