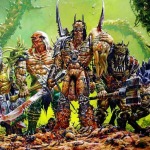 Bow down peasants! We have new overlords, and they demand your complete obedience!

The Scumdogs of the Universe, known lovingly here on planet Earth as GWAR, have announced that their reign of terror will not cease with the loss of leader Oderus Urungus, who passed earlier this year.

Something is wrong, unspeakably wrong. It feels as if the very fabric of reality has been ripped from belly to taint. And it all centers around Oderus’ disappearance. One moment, life is fantastic, as we celebrate the near sinking of Japan as a result of our recent journey across the Pacific; and the next, he is just gone. Suddenly the world is a dark, vile place with hordes of trolls biting at my hooves and daring to spit poison in my face. There is a great evil behind this, and I will not rest until I know what has become of my brother!

To find the answer to this dilemma, GWAR will embark on a N. American tour this fall that will see the appearance of two new Scumdogs: Blóthar on lead vocals and bass guitar and Vulvatron on vocals.

As for the appearance of a new female amidst their ranks, drummer JizMak da Gusha stated, “Dames, they ain’t nothin’ but trouble.”

Head below to see their full touring schedule.