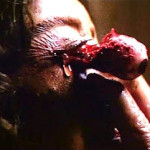 In “shut up and take my money” news; the Lucio Fulci classic The Beyond (AKA 7 Doors of Death) and Cannibal Holocaust are coming to bluray via Grindhouse Releasing! Although no release dates have been announced, these should be at the top of every horror fans Xmas wish list. With any luck, Cannibal Holocaust will see a release before Eli Roth’s remake/reimagining titled “Green Inferno” (September 5).

The Beyond Synopsis
A young woman from New York named Liza (Katherine MacColl) inherits a Louisiana motel that has been unoccupied for nearly 60 years. While restoring the old building, many of the workers meet mysterious and untimely deaths, each more ill-fated than the next. Furthermore, Liza is visited by a blind specter named Emily (Sarah Keller), who lectures from a 4,000-year-old book of collected prophecies that explains the motel is situated above one of seven portals to hell. As her sanity dwindles, Liza finds some much-needed stability in a local doctor named John McCabe (David Warbeck), who is determined to find a rational explanation for the recent state of affairs. Nevertheless, the protagonists are led through a maze of bizarre confrontations with beings beyond the realm of the living and into an apocalyptic world of unknown horrors. The Beyond is at once the quintessential Lucio Fulci film and a staple in the overall Italian horror genre. The director’s epic masterpiece is a blend of atmospheric surrealism and nightmarish visions (a grisly tarantula attack, flesh-melting acid spills, a softball-sized gun blast through the skull of a young zombified girl, and an eyeball impaling or two) that are definitely unsuitable for those with weak stomachs.

Cannibal Holocaust Synopsis
Banned and heavily censored the world over, here is a film that surpasses its reputation as a shotgun blast to the senses. Cannibal Holocaust presents the “found footage” of a group of four documentary filmmakers who experience brutal death at the hands of a savage South American tribe of flesh-eaters. This footage is so intense, so graphic, and so unflinching in its realism that the director and producer of Cannibal Holocaust were arrested upon its original release and the film seized. With a soundtrack by Riz Ortolani.