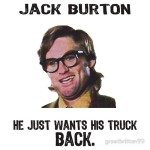 This is hands down the most exciting news I’ve had the privilege of reporting on Who Goes There! If you’ve listened to our show at all you know I’m mildly obsessed with Big Trouble In Little China, well guess what; Jack’s back! No I don’t mean Bauer. (although he’s back too.)

This June, BOOM! Studios will tell you just what ol’ Jack Burton says in his continuing adventures in Big Trouble In Little China, a new, ongoing series from comics favorites Eric Powell (The Goon) and Brian Churilla (The Sixth Gun: Sons of the Gun). The cult-classic film combined ‘80s supernatural action with ‘70s kung-fu flicks, and BOOM! has the film’s original director, John Carpenter, working alongside Powell to bring that over-the-top spirit to the comic. 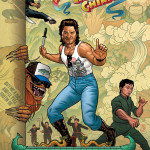 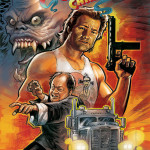 “It’s already been a rewarding journey bringing ol’ Jack Burton back for new adventures and we’re just barely getting started,” said BOOM! Studios Editor-In-Chief Matt Gagnon. “I have fond memories of watching Big Trouble In Little China, cracking up at Jack Burton and his plight. I always thought there were so many more stories to tell with that character and the world he inhabits. So putting together the amazing team of Eric and Brian for this series, along with the guidance of John Carpenter, has been a dream come true. Now everybody can truly relax. Jack’s here.”

Jack Burton, a macho, truck-driving adventurer, finds a stowaway hiding on his rig, The Pork Chop Express, but that soon becomes the least of his troubles. He helped his best friend Wang save his fiancée from the clutches of a demon, but now the wedding has been invaded by more evil forces with one thing on their minds—revenge against Jack Burton!

Big Trouble In Little China #1 arrives in comic shops on June 4th with a cover price of $3.99 under Diamond order code APR140960. The main cover is illustrated by Eric Powell, and retailer incentive covers by Joe Quinones (whose covers for issues #1-4 will connect), Chris Weston (The Filth, The Invisibles), and Terry Dodson (X-Men), will be available in limited quantities. Additionally, an ultra-limited variant illustrated by Emi Yonemura Brown featuring Jack Burton’s iconic tank top will also be available. Not sure where to find your nearest comic retailer? Use comicshoplocator.com or findacomicshop.com to find one! It’s also available for order directly from boom-studios.com.