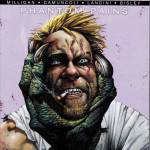 Casting is wrapped for the pilot NBC has ordered for “Constantine,” better known to DC Comics fans as “Hellblazer.”

After the story of John Constantine was told on the silver screen in a 2005 movie starring Keanu Reeves, I have hopes that the small-screen series will 1) be picked up, and 2) will rely more on the canon from the creators of “Hellblazer.”

For a start, the Britishness of John Constantine is back. The lead role will be played by Welsh actor Matt Ryan (“Criminal Minds: Suspect Behavior”), whose look is satisfyingly scruffy if less like Sting than the “Hellblazer” creators intended.

The show also rights a horrible wrong by casting the highly appropriate Charles Halford (“True Detective”) as Chas Kramer, the role that in 2005 helped Shia LaBeouf start on his path to not-being-famous.

Because no TV cast is complete without a beautiful woman, we get to see Lucy Griffiths, another Brit, move to network after her role as Eric Northman’s “sister” on HBO’s “True Blood.” She’ll play a girl who teams up with Constantine to save lives and master her new-found power of seeing the supernatural.

Harold Perrineau gets to play an angel — nice for him that he’s moved up in the heavenly food chain after being stuck in purgatory for so long on “Lost.”

No word yet on when production for the pilot starts, but I’ll be on the lookout after summer for promos when NBC wants to start whetting viewers’ appetites for the 2014-15 season.