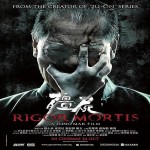 “A washed-up actor, desperate and suicidal, moves into a haunted apartment building where supernatural creatures, ghost hunters, taoist exorcists, and the souls of the undead walk among his neighbors.“