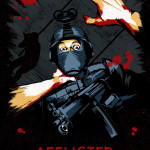 Good lord, today I watched Afflicted, and I’ve got to say it is the best film I’ve seen all year, and one of the best I’ve seen in a looooong time!

Here are a couple of clips in promotion of the first feature film from Derek Lee and Clif Prowse.

CBS Films has released Afflicted in theaters and on various VOD platforms. Look for it on iTunes, Amazon, VUDU, Google Play, Cable On Demand, Playstation, and Xbox.