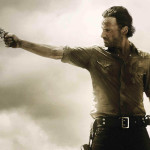 In what may be the most metal, horrific, and all around bad ass news I’ve ever heard; Philadelphia’s Dock Street Brewing is releasing “Walker”, a Walking Dead inspired American pale stout brewed with roasted goat brains! Yeah, you read the correctly, if you’ve always wanted to act like a zombie, but didn’t wanna do the jail time for cannibalism, now you can. The beer will be released March 30 to coincide with the season finale of The Walking Dead. Continue reading for the press release. END_OF_DOCUMENT_TOKEN_TO_BE_REPLACED