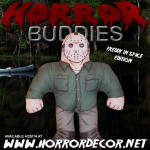 As a kid my brothers and I would spend HOURS beating the living crap out of our Wrestling Buddies; Jake the Snake, Ultimate Warrior, I can’t count how many times I powerbombed Big Boss Man “through a table”. HorrorDecor.net has taken the concept and created Horror Buddies! This Friday, April 25th they will be releasing their second Horror Buddy, Jason Voorhees! Keep your eyes on the official HorrorDecor website for this must-have item to go on sale.