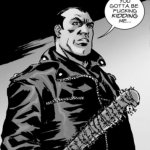 “You know what, I wasn’t. I wasn’t, but I heard that from people. Ultimately for me it’s just really nice; it’s such an incredible compliment that you think of me for these characters. I’m so grateful for that,” explains Durand. “But no, nobody ever talked to me about that.” END_OF_DOCUMENT_TOKEN_TO_BE_REPLACED