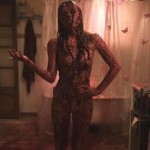 The madness began when a substitute teacher showed Drafthouse Films and Magnet Releasing’s The ABCs of Death to several Spanish classes at East High School in Columbus, Ohio. She claims she did not watch the movie prior to showing the classes, and thought the film was in Spanish. The best part is: she claims she had her back turned each time she showed the film, and was unaware of what was on the screen. I hope she actually got convicted of being a fuckin idiot. END_OF_DOCUMENT_TOKEN_TO_BE_REPLACED