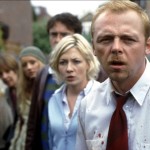 Nick Frost (Shaun Of The Dead) has announced he direct a horror short he wrote earlier this year. No plot details or title have been released.

Frost on directing, “Our films, we have so much say in terms of how it should be done. Not with Edgar (Wright, director of Shaun of the Dead/Hot Fuzz) — Edgar’s different because he’s a savant and has worked out every possible angle before we even got to set, but the things I do without Edgar, people are always happy for you to pipe up and say, ‘Hey, maybe we should shoot this here.’”