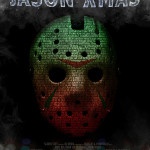 A short time ago, we introduced you to the first installment of ScaredStiffTV’s Jason X-mas, a fun, fan made web series, following everyone’s favorite, slow witted, hockey masked, machete wielding killer, as he spreads he unique brand of chaos and cheer around Christmas. Episode 2 has now been posted, with a new episode coming each month, leading up to it’s Christmas finale in December. Check it out in the comments. END_OF_DOCUMENT_TOKEN_TO_BE_REPLACED