We apologize for the lack of an episode last week. One of my best friends passed away unexpectedly on June 18 and it has been a pretty rough week for me.

If you or anyone you know are having a rough time, there’s always help. Reach out to your friends and family, hell, reach out to us if that will help. Here is the number to the national suicide prevention hotline: 800-273-8255.

Take care of yourselves, and each other. Rest in power, DImes.

I don’t fully understand why, but Hollywood has this massive hard-on for releasing sequels to comedies 10 years after the original is released. With the exception of Super Troopers 2 they have all been absolute garbage. Anchorman, Zoolander, Bad Santa, if you loved a comedy in the late ’00’s chances are there’s a terrible sequel that recently came out. It seems to only make sense that one of the most successful zombie films ever should get the unnecessary sequel treatment.

This brings us to present day and the release of Zombieland 2: Double Tap. (Review starts at 24:00) Get it? Double Tap? It’s like, one of his rules, but also like a pun, because it’s a sequel, double, two, same. Yeah, it’s basically more of that stuff. It’s all good though, now Rosario Dawson is in the movie, so there’s that.

With endless love, we left you sleeping. Now we’re sleeping with you. Don’t wake up. X-cept for the Who Goes There Podcast episode 234!

It would seem as though we no longer screen our guests here at the Who Goes There Podcast. Somehow Christian Stella has wormed his way back onto the show to really bum us all out. We watched the most recent Stephen King abortion…I mean adaptation Cell. Guys, I know we shouldn’t be spoiling the episode in the description, but this movie…is SHIT. So there’s that. We also touch on some Greasy Stranglers, and we get P.O.S.’ feeling’s on Half Cocked Concepts. Here’s to swimmin’ with bow-legged women, it’s the Who Goes There Podcast episode 72.

And it all comes full circle. When we started this show, we decided the first movie we wanted to do, we came up with a name, created an email address and contacted the director of said movie all while at a baseball game. Now here we are, on our third birthday, returning to our roots. That’s right we’ve finally got Chris Franco to watch The Battery! We take a look back at the film that started it all and see if after 3 years it still holds up. We also discuss the massive shit Eli Roth is trying to take, the horrible things Alia does for love, how absolutely disgusting Matt is, oh, and we debut a brand new theme song from San Diego horror punk band Batlords! Does Franco realize the greatness of The Battery? Is Mickey still a giant bitch? Does Jorge make it through an episode without losing his shit? Hey, you leave my god damn hair alone! It’s the grey, the bald and the ugly! 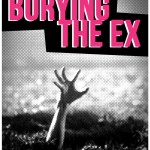 We hope you had a great 4th of July, in the spirit of America, we’re gonna run our big fat mouths about things we know nothing about. We’re gonna freedom of speech ourselves all over Joe Dante’s new film Burying The Ex. We talk about our upcoming charity event, the cancellation of Hannibal, and at least one of us has an uncontrollable giggle fit. God damnit.

If you ain’t poopin’, you’re full of shit. It’s the Who Goes There Podcast Episode 44!

After the tragic events of the mid-season finale–as well as losing the possibility of a cure in Washington, DC–Rick Grimes’ band of survivors find themselves on the road, surviving day to day and trying to hold on to their shredded humanity and dwindling hope. END_OF_DOCUMENT_TOKEN_TO_BE_REPLACED

The figure will come with backpack, pistol, and hammer. END_OF_DOCUMENT_TOKEN_TO_BE_REPLACED 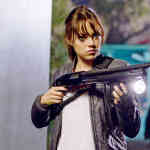 The studio just hired Dave Callaham to write the sequel under the supervision of Ruben Fleischer, who’ll return to direct. END_OF_DOCUMENT_TOKEN_TO_BE_REPLACED

AMC’s The Walking Dead – the adaptation of Robert Kirkman’s awesome Image comic series – is entering its fifth season this coming October. For any series to make it this far, and to syndication, is quite a feat. The cable zombie series is one of the most popular shows on television, and with no end it sight AMC is drooling for more. Even with a planned spinoff series, the cabler is planning to take “The Walking Dead” as far as 12 season. That’s heading into “The X-Files” territory (they had nine and two movies). END_OF_DOCUMENT_TOKEN_TO_BE_REPLACED