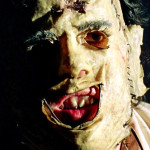 A new Texas Chainsaw Massacre was on the way, as confirmed by The Wrap.

They learned who is behind the screenplay: Black List scribe Seth M. Sherwood, who will be penning the teenage years of Leatherface.

Millennium Films is behind the prequel, with Lionsgate in talks to distribute.

Production could start as soon as this winter, says the site, with a director expected to sign on in the coming weeks.