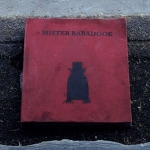 Join Mister Babadook in his evil plans for world domination by helping him get his very own pop up book published, and score yourself a copy in the process!

The Babadook was the breakout horror hit of Sundance 2014, and has been terrorising audiences around the world ever since. This creepy, expertly crafted feature has been a critical and audience scare favorite, winning a slew of awards for best film, best actress, best director etc. Mister Babadook is also the name of the pop-up book in the film.

For the hefty sum of $80(USD) you can bring the story of The Babadook home! Each book will have a beautiful red fabric hardback cover, each pop-up image will be printed on beautiful quality paper, hand glued and made to the highest standards. Just like the book in the film.

Books will ship in mid-2015 if a minimum of 2000 preorders are reached. Your card will not be charged until campaign is successful.