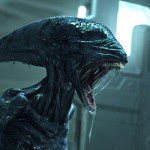 Back in October Noomi Rapace, who plays Elizabeth Shaw in Prometheus, exclaimed that God or the Devil will appear in Ridley Scott’s planned sequel.

Scott refutes this a bit in a new interview with The Austrailian. In it, he explains that the script, which is “written (and)…really good,” is “fresh” and “getting away from gods and dragons and shit. If I see one more dragon I’m going to shoot myself. Stop the dragons.”

Scott describes his original Alien as “the definitive dragon and he’s a motherfucker. The alien’s real which is why it’s probably one of the scariest monsters in film history,” Scott says. “So with Prometheus 2 what I’m trying to do is reintroduce a fresher form of alien in the third act.” The Prometheus “baby” alien was, he concedes, “awfully close to the alien” that tormented Sigourney Weaver. His next one promises to be very different.