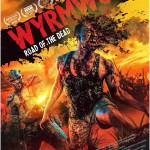 You know what’s better than an April fool’s joke? A late April fool’s joke! We were on vacation and fooled ourselves into thinking we were going to post an episode last week, plus baseball. Sooooo….whoops! We’ll get another episode up next week and get back on track. In the mean time, did you ever watch Mad Max and think, “this would be better with zombies”? Me neither, but those cooky folks down under did, they also liked big guns, heaving sweaty bosoms, undead mind control and using zombies as fuel! We laugh our asses off at 2014’s Wyrmwood: Road of the Dead! We’re not putting our massive cocks away, it’s the Who Goes There Podcast episode 39!