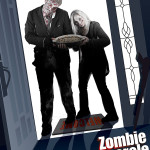 You now have the chance to own one of the best zombie comedies of 2014! New on DVD and Bluray from Small Basket Studios is the award winning zombie comedy (zombedy?) Zombie Casserole! Pick yours up right here, we’ll also be giving one away very shortly.

The zombie apocalypse came and went. It was a nonevent. Now the undead are having a hard time trying to fit into society. Wally is an anti-zombie bigot who doesn’t think they deserve anything but a swift burial. He’s forced to face the object of his hatred head on when he gets an unwelcome surprise while hosting a family dinner.