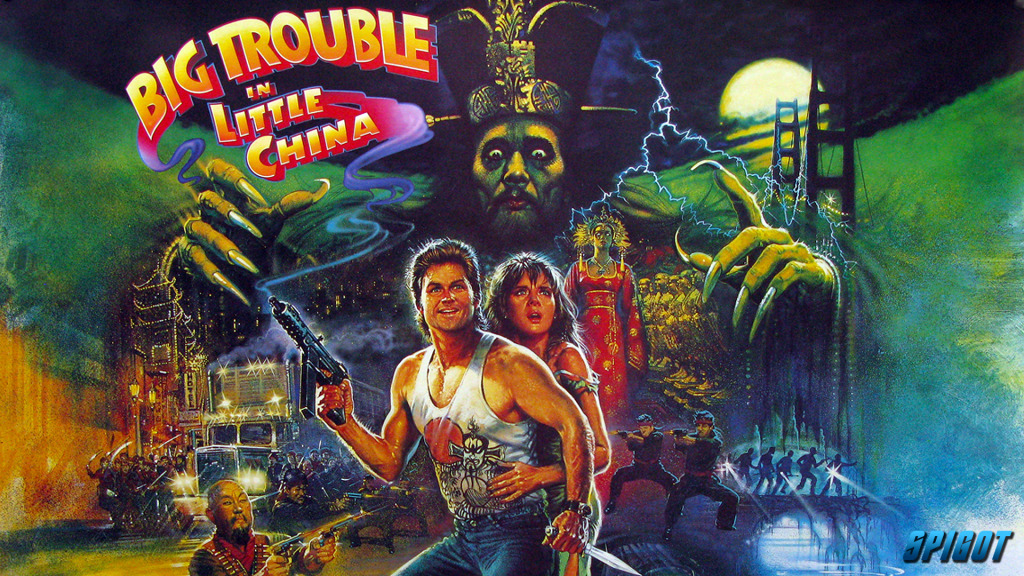 This is Jack Burton in the Pork Chop Express, and I’m talking to whoever’s listening out there…actually, I’m Matt Smith of the Who Goes There Podcast, and I’m pleased as piss to be part of this month’s “Beer & A Movie”!

Our buddies over at Three B Zine, Craft Beer Tasters, and Reviews Galore (check out their reviews at the respective links) have a monthly column where they review a movie and pair it with a beer that shares some kind of theme with the film. October’s movie just so happens to be 1986’s cult classic Big Trouble In Little China, directed by horror legend John Carpenter. Anyone who knows me, has met me, or has even heard our show, knows I eat, sleep and shit BTILC. They then decided; not getting me involved would be like going to battle with Lo Pan without your six demon bag!

With my obsessive love of this absolutely brilliant film, I thought “oh, this will be easy! I’ll be in and out, like the wind.” Then I hit a ten foot tall road block (with light comin’ out of his mouth): what could you possibly pair with greatness? I’ll tell you what you pair with greatness: more fuckin’ greatness! This is exactly why I chose Yeti by Great Divide, a BIG beer, for some BIG trouble! 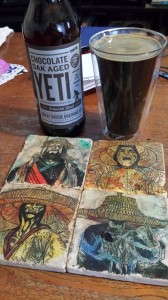 Everything about Great Divide’s Yeti fits perfect with this movie; let’s look in shall we? First, there’s the name of the beer, “Yeti”; there is a large Sasquatch type character (known as the “Chinese Wild Man”) who plays a pretty big part in the film. Now what about the brewery? Great Divide, this is a reoccurring theme in the film, everything in the film boils down to one extreme vs the other: Chang Sing vs Wing Kong, East vs West, good vs evil, light vs dark, not to mention the “great divide” of Wang Chi and his fiance Miao Yin, the reason this whole damn thing began!

Yeti is an incredibly dark Imperial Stout, darker than black blood of the earth! Weighing in at a huge 9.5% ABV, it’ll tear you up worse than The Three Storms in a back alley brawl, but is as sweet as Miao Yin in a silk nightgown. A combination more rare than a Chinese girl with green eyes, yet sure to appease any emperor. One bottle of this and you’ll be as cock-eyed as Egg Shen in no time. As much as I love this beer, and “there have been others, there are always others to be sure” I’m not here to talk beer, son! 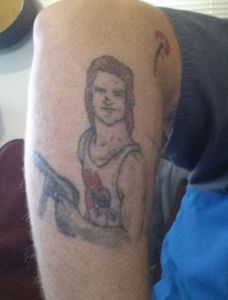 Now you may be asking yourself, “how much do you really like Big Trouble In Little China”? To which I would respond with a cosmic bitch slap and a “Don’t you EVER question my love of BTILC”!

My father was never a great man, but the greatest thing he ever did, was 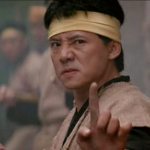 show me BTILC when I was 5 years old, and it’s been my favorite movie ever since. No horse shit, Wang. I have a cartoon Jack Burton tattoo on my forearm, several BTILC shirts, action figures, posters, several of my email addresses and login names are BTILC references, hell I even married a Chinese girl! (no green eyes, but science willing!) There’s even pictures of me as a young kid throwing up this Chang Sing sign.

Originally written as a western, (yeah, look it up) 1986’s Big Trouble in Little China follows Jack Burton; (the almighty Kurt Russell) the arrogant, wise cracking, truck driver, who after a night of drinking and gambling drives his pal Wang Chi (Dennis Dun) to the airport to pick up his fiance Miao Yin from the airport after flying her to the US from China…then shit gets crazy! Miao Yin is kidnapped by the Lords of Death street gang, sending our heroes(?) on the ride of their lives! 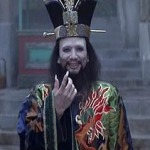 Jack and Wang must track down and rescue Miao Yin, who has been kidnapped by Lo Pan, (James Hong) a 2,000 year old Chinese sorcerer, who angered his emperor and was cursed to be of no flesh, until he married and sacrificed a girl with green eyes.

Along the way Jack and Wang team up with Egg Shen, (Victor Wong) a Chinese sorcerer who must fulfill his destiny of destroying Lo Pan, and Gracie Law (Kim Cattrall) a know it all reporter, dead set on exposing Lo Pan and all his evil doings, and the Chang Sings, a gooood street gang?

The Bad: You shut your whore mouth!

Overall: This is a cheesy early 80’s action film, and if you take it as anything more 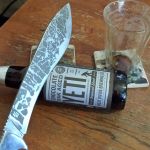 you’ve completely missed the point. Russell and Carpenter even get hammered in the DVD extras, and point out that aside from the very end of the film, our “hero”, Jack Burton, doesn’t seem to actually do anything heroic through the entire film. It’s a fun, action packed ride, for those who can appreciate a movie for what it’s supposed to be: fuckin awesome! And you know what ol’ Jack says, “Fuck it”. (Yes he does!)

Now, nothin or double, says this knife cuts this bottle in half.