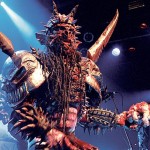 This is the most sad news we’ve had to report; according to Style Weekly, Dave Brockie, better known as Oderus Urungus, the founder and lead singer of renowned metal band GWAR, has died. Roommates reportedly found Brockie’s body at his home Sunday evening (March 23). “I wish it was a joke,” former GWAR bassist Chris Bopst, a music writer for Style Weekly, tells the site. “Everyone is in shock.” Brockie was 50 years old.

“Dave was one of the funniest, smartest, most creative and energetic persons I’ve known,” former GWAR bassist Mike Bishop told Style Weekly. “He was brash sometimes, always crass, irreverent, he was hilarious in every way. But he was also deeply intelligent and interested in life, history, politics and art. His penchant for scatological humors belied a lucid wit. He was a criminally underrated lyricist and hard rock vocalist, one of the best, ever! A great front man, a great painter, writer, he was also a hell of a bass guitarist. I loved him. He was capable of great empathy and had a real sense of justice.”

Vocalist Tony Foresta of fellow Richmond, Virginia band MUNICIPAL WASTE, which toured with GWAR in 2012, wrote on Instagram: “I’m so devastated right now. One of the most fun, brilliant, inspirational and creative people I’ve ever had the privilege to call a friend has passed. I’m going to miss you so much, pal.”

According to Australia’s TheMusic.com.au, GWAR’s management will issue a statement regarding reports of Brockie’s passing at approximately 1:00 p.m. EST today.