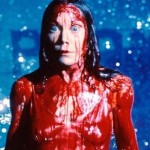 By now we’ve all seen this ridiculous ice bucket challenge to raise money for ALS. Whether you’ve done the challenge, or are on the “don’t waste water” side of things, the “challenge” has been ahuge success and given us some great videos, like this new one from Foo Fighters’ Dave Grohl channeling his inner “Carrie“.

The clip starts off innocently enough, with Grohl explaining who he is, the purpose of the video, and then calling out Stephen King (who accepted his challenge), John Travolta, and Jack Black. From there, the video pulls back and reveals itself to be a parody of Carrie, complete with scenes from the original film itself. Grohl plays Carrie while Taylor Hawkins plays Tommy, her prom date.