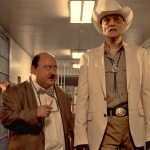 Yes, The Human Centipede 3: Final Sequence is on its way from twisted director Tom Six, and boy does it sound like a doozy. Though we don’t yet know all that much about the project, we do know that it’s going to be even crazier than the first two installments of this whacked out franchise, which is almost hard to even imagine.

“Laurence played a mute in Part 2; now he is a smart guy with a whole lot of dialogue,” he explained. “Dieter played a cold, restrained doctor in Part 1; now he is a loud, racist, sadistic a–hole. Robert Lasardo plays a very cool, daring part, and I gave ex-porn star Bree Olson her first break as a serious actress, and she does one hell of a job. I play ‘Tom Six’ in the movie, which is an Oscar nomination performance.”

Described as “darkly comical,” Six went on to say that Human Centipede 3 will be a complete departure from anything we’ve yet seen from the franchise, and he noted that it will be “less gross.” Of course, “less gross” doesn’t mean it won’t still be totally gross, and the fact that it will boast a 500-person centipede leads us to believe it’s going to be pretty damn gross.

It’s been a while since we’ve heard anything about The Final Sequence and today Tom Six broke that silence by uploading an audio clip from the film, which plays over a previously unreleased still image. The still gives us a look at the film’s setting, which will be a maximum security prison in the middle of the desert.

Check out the clip below, and stay tuned for more real soon!