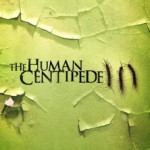 We’re getting closer, kids! Pretty soon Tom Six’s The Human Centipede 3: Final Sequence will be slithering our way, but for now Entertainment Weekly scored the first official image from the film featuring the two big bads taking a stroll!

“Dieter Laser and Laurence R. Harvey play very different characters that will put Dr. Heiter and Martin in the shade,” Six tells the EW. “They are both brilliant actors with their own style. Laurence played a mute in Part 2; now he is a smart guy with a whole lot of dialog. Dieter played a cold, restrained doctor in Part 1; now he is a loud, racist, sadistic a–hole. Robert Lasardo plays a very cool, daring part, and I gave ex-porn star Bree Olson her first break as a serious actress, and she does one hell of a job. I play ‘Tom Six’ in the movie, which is an Oscar nomination performance.”

“THC Part 3 will be totally different from Parts 1 and 2 and certainly not as gross, Six continues about the film’s plot, “But it will be the most controversial one politically-wise. It will have a lot of self-mockery and will be the most darkly comical of the three. Parts 1 and 2 have a very European feel. Part 3 is very American with the highest budget, a big movie score, widescreen, and an XXL human centipede. It’s set in an American maximum security prison in the middle of the desert…”

Six also confirms said 500-person centipede, which is achieved without any serious effects work! “By having a lot of brave American extras and doing it the megalomanic way like they did in ‘Spartacus,’ ” Six says. “Fuck CGI-created things.”