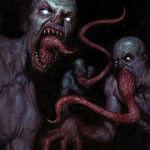 There is no doubt that now is possibly the best time ever to be a fan of horror television. Get ready because FX will debut their new drama series, The Strain, from Academy Award nominated filmmaker Guillermo del Toro, author Chuck Hogan and writer/producer Carlton Cuse, on June 22.

“‘The Strain’ is a high concept thriller that tells the story of “Dr. Ephraim Goodweather” (Corey Stoll), the head of the Center for Disease Control Canary Team in New York City. He and his team are called upon to investigate a mysterious viral outbreak with hallmarks of an ancient and evil strain of vampirism. As the strain spreads, Eph, his team, and an assembly of everyday New Yorkers, wage war for the fate of humanity itself.”