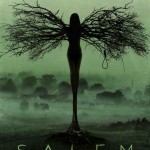 Official news has hit that shock rocker Marilyn Manson has teamed up with composer Tyler Bates to create the theme song to the new WGN America show Salem. The track, entitled “Cupid Carries A Gun”, will take over as the opening title sequence from the second episode on.

Continue reading to see the credits with the new theme.

Manson explains, “The song “Cupid Carries a Gun” was the last track we just finished for my new album. The occult and witchcraft [are] so often used in cinema with a heinous disregard for even researching its origins. However, I liked the themes of Salem. It looks at the witch trials without being cliche like most modern films.”

Bates adds, “Manson and I wrote a draft of “Cupid Carries A Gun” shortly before I began working on the score for Salem. A couple weeks later I saw the title sequence and the song immediately came to mind. I showed it to Manson for fun more than anything, and it inspired us to finish the song that night. The next day I played it for Brannon Braga and he said that “Cupid Carries A Gun” was the perfect tone and attitude for the show’s main titles.”.