Check the comments for a plush “Mother” from Psycho,a 15″ talking Chucky doll, and a SUPER limited Universal Monsters “Mummy”, limited to only 250 pieces worldwide. I don’t mind telling you because I already ordered mine.

Buried beneath the sands of time he rested, until he was awoken by Mezco’s award-winning design team.
Now, Mezco proudly presents…The Mummy!
This iconic terror from the beneath the sand stands 9” tall and captures the intricate detail of each ancient bandage: from his mysterious eyes, to his legendary scarab ring.
With 11 points of articulation he’ll be able to take out any explorer who dares to come between him and his tana leaves.
He is packaged in a full color, collector-friendly window box. 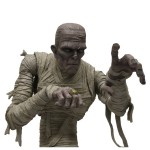 Mezco expands their ever-growing line of hit Chucky collectibles with one of the most frequently requested items: “Good Guy” Chucky.

Unlike the scarred and battle-damaged look Chucky normally displays, people have tried to destroy him in 6 films so far, this version represents the cleaner, earlier Chucky. His trademark outfit is un-slashed, his face is not yet mauled.

Just as he did in his films, Chucky has lots to say, from his trademark “My name is Chucky” to far more sinister phrases.

Each Chucky comes packaged in his own collector friendly window box based on the original box design seen in the films.

NOTE- Prototype shown, final product may vary. Mouth does not move while speaking. 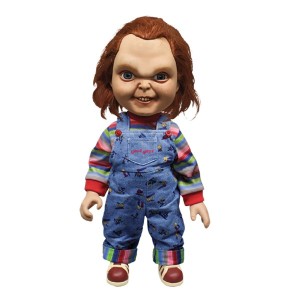 Mezco makes Mother’s Day extra special this year with the release of one of cinema’s most famous matriarchs…Mother Bates from Alfred Hitchcock’s Psycho!

Mother stands 14 inches tall and features a soft, floppy, poseable cloth body and rotocast head, hands, and feet. Mezco’s award-winning design team has recreated her screen accurate dress and shawl , and Mother’s head and hands have been sculpted with intricate detail. Her gaping mouth forever frozen in a deathly skeletal grin beneath the hollow sockets of her eyes, her desiccated skin clings to her boney, gnarled, clawlike hands. She sits…and waits.

Nominated for a quartet of Academy Awards, the psychological thriller Psycho not only changed the world of horror, but how movies are marketed as well. Alfred Hitcock went to great lengths to keep audiences from revealing Mother’s secret, now Mezco wants her to go home with you! Mother comes complete with an informative hang tag. Motel not included. 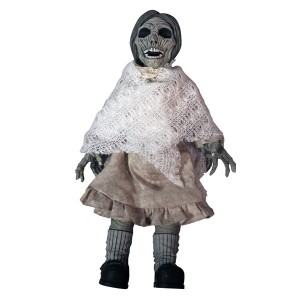