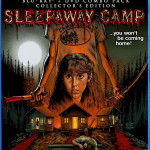 Everyone’s favorite movie, containing a dick unexpectedly shoved in your face, is coming to bluray! On May 27, the original Sleepaway Camp is coming to bluray. In addition to a sweet new cover, the disc has a huge package of bonus features. (Get it? Package? Cuz Angela has a……) Check out the cover art and a press release about what goodies you can expect to find. Oooooooooooh I’m a happy camper! 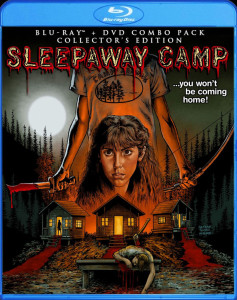 From the Press Release
Welcome to Camp Arawak, where teenagers learn to experience the joys of nature, as well as each other. But when these happy campers begin to die in a series of horrible “accidents”, they discover that someone – or something – has turned their summer of fun into a vacation to dismember.

Avid fans and collectors please take note: Those who order SLEEPAWAY CAMP Collector’s Edition Blu-ray from ScreamfactoryDVD.com will receive the exclusive 18”x24” poster featuring the newly commissioned artwork! These are only available while supplies last.

Synopsis
After a terrible boating accident killed her family, shy Angela Baker (Felissa Rose, Return To Sleepaway Camp) went to live with her eccentric Aunt Martha and her cousin Ricky.

This summer, Martha decides to send them both to Camp Arawak, a place to enjoy the great outdoors. Shortly after their arrival, a series of bizarre and violent “accidents” begin to claim the lives of various campers. Has a dark secret returned from the camp’s past…or will an unspeakable horror end the summer season for all?

From its grisly makeup effects to the truly shocking, and unforgettable, climax, Sleepaway Camp is no ordinary slasher film…it’s a cult classic! 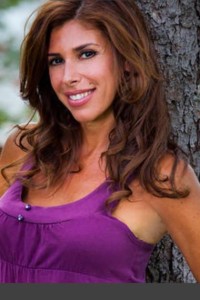 Seriously though, Angela turned into this…tell me you wouldn’t.