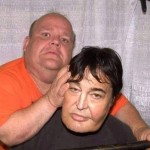 Born Robert J. Zdarsky, the 6-foot-2 actor was featured in more than 121 films, including cult classics like the first three “Maniac Cop” films, “Soultaker,” “The Final Sanction” and “Samurai Cop” (the sequel to which Z’Dar had been set to join immediately after Pensacon). He also enjoyed roles in mainstream hits such as “Tango & Cash” and TV roles on “Growing Pains” and the 1990 series “The Flash.” END_OF_DOCUMENT_TOKEN_TO_BE_REPLACED