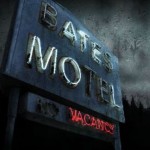 Bates Motel, the critically acclaimed A&E original series has been picked up for a third season, and will begin production on 10 episodes this fall. The news was announced today by David McKillop, Executive Vice President and General Manager, A&E Network.

“The incredible writing team and talented ‘Bates Motel’ cast has made this series one of the most compelling original dramas on television,” said McKillop. “The brilliant twists and turns of the past two seasons keep its loyal fan base coming back for more. We are so proud of the show.”