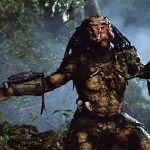 In one of the best videos to hit the internet in quite a while, makeup FX legend Steve Johnson recently appeared on the first episode of The Monster Show, and gave a little insight to his nightmare stint as Boss Films’ Creature FX supervisor on the first ill-fated Predator suit, worn by Belgian martial artist and aspiring action star, Jean-Claude Van Damme. This video is comedy gold! Do yourself a favor and continue reading to watch!