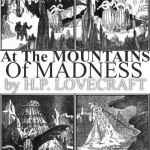 Guillermo del Toro always seems to have a dozen films on his plate. One of them that has been simmering for a while is his dream project that’s been in cinema purgatory for years: H.P. Lovecraft’s At the Mountains of Madness. Recently he stated that he’s considering compromising with Universal to bring his vision to the big screen, albeit a toned-down PG-13 version. Now there’s more news concerning the project.

Collider recently spoke with the director and he explained that he’s considering shooting his true, R-rated vision simultaneously so that an “unrated” cut can be released on home video following the PG-13 theatrical run. But not only is he considering his cut for a home video release, he wants to release both version simultaneously. Like. A. Boss.

“That’s actually exactly what I’m thinking. The way I’m thinking is, PG-13 goes a long way. It’s not that the novel is graphic, but people forget that there are crucial elements in the novel that are pretty horrific. Like the human autopsy, you know? I think that’s a dark moment. So what I would like to do is shoot it, as dark as it is, in an unrated cut and a PG-13 cut. Ideally they would be released simultaneously if that’s at all possible. We could release one [cut] in a certain format and the other in a different format with the hopes that we can offer more intense moments in one cut and equally intense moments but without graphic content in the other cut. Lovecraft was famous for suggestion, and a lot of the piece can suggest, but there are [certain moments] you need to show. Part of it is budget, part of it is rating. The one thing I’ll say is that at this stage for me, Mountains is not made. So I’d rather make it in a way that doesn’t compromise the content, or not do it. And, in the last few years, what has changed is that I’ve seen PG-13 films that are very intense. For me Life of Pi, the first 25 minutes of that movie were really very intense with the violence on the boat and the sinking. I came to think, “you know what? It is possible to go to places that are intense but still have a strong appeal for a rating.” That, I think, is the main thing that changed.”

In Collider’s article, del Toro elaborates on the project, stating he has about 50 pieces of key art complete, along with maquettes, concept art, and storyboards.