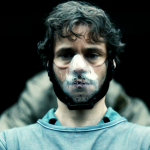 While previous seasons of Hannibal have debuted amongst the cold embrace of late winter or early spring, this summer will see the return of the gore soaked gothic drama. NBC network entertainment chairman Robert Greenblatt confirmed Friday.

Presumably because Will and Hannibal will have a hot oil wrestling match in the bright hot sun, of course this will be the rematch of the summer. But more likely is that NBC wants to bring the show to a place where low ratings are a-okay, and to offer you a special kind of existential dread to serve with your pitcher of sangria. “It’s a show we love, it’s critically acclaimed, we love it,” NBC Chairman Bob Greenblatt said. “And we also love summer. We have exciting plans for summer.”

One can’t argue with exciting plans. I anticipate ‘Hannibal’ doing much better in the summer. With a devoted fanbase and less competition for ratings we may yet get a season four.