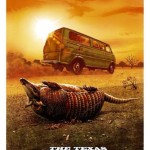 In celebration of Leatherface’s 40th birthday, MPI/Dark Sky Films has just announced that they’ll be continuing that tradition by bringing the original Texas Chainsaw Massacre back to the big screen this summer, in the form of a newly restored print of the classic film. The brand new restoration will be unveiled at this year’s SXSW Film Festival, kicking off this weekend, and then it will embark on a widespread roll-out when the weather gets warmer.

The new prints boast a never-before-seen 4K transfer, which is roughly four times the resolution of the majority of films released into theaters. This will be the first ever  transfer of the film to utilize the original 16mm film rolls, and the color grading and video/audio restoration process took 5 months to complete.

What does this all mean, in layman’s terms? Well, it means that not only will we be able to see Texas Chainsaw Massacre up on the big screen, but we’ll also be able to see it looking better than it has ever looked before.

“This 40th anniversary restoration is absolutely the best the film has ever looked,” says Hooper. “The color and clarity is spectacular, displaying visual details in the film that were never before perceptible. The newly remastered 7.1 soundtrack breathes new life and energy into the film. I am very much looking forward to audiences experiencing this film as they never have before.” 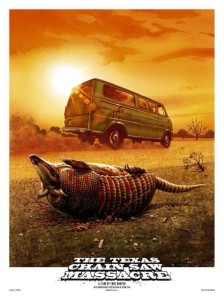 The above poster art for the re-release was made by the insanely talented Jason Edmiston, and we’ll be sure to let you know when we hear anything further about this incredibly exciting revival!