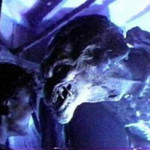 The Tracking Board has reported effects legend Stan Winston could see his 1988 Pumpkinhead rebooted!

The original Pumpkinhead was produced by the De Laurentiis Entertainment Group headed up by Italian producer Dino De Laurentiis. De Laurentiis went on to produce Hannibal and Red Dragon. For the rest of the franchise, the Motion Picture Corporation of America (MPCA) headed up by Brad Krevoy took the reins and is now back to produce the rebooted series, explains the site.

This could turn out to be really awesome, unless Pumpkinhead is CG.