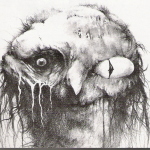 CBS Films’ Scary Stories To Tell In The Dark adaptation is now in some safe hands, and could be tipping off someone else involved.

Deadline reports that BAFTA-nominated John August – who is a regular Tim Burton collaborator, penning both Big Fish and Frankenweenie – will adapt the iconic book series by Alvin Schwartz that had children of the ’80s and ’90s hearing bumps in the night.

Could this mean Tim Burton’s involvement is not far behind? Let’s hope so because the books’ art, by Stephen Gammell, channels the iconic artist/director.

Sean Daniel and Jason Brown of Sean Daniel Company and Elizabeth Grave of 1212 Entertainment are producing, while Roberto Grande and Joshua Long will executive produce. Mark Ross and Alex Ginno are overseeing for CBS Films.