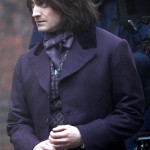 January is normally when studios dump the films they expect to under perform. (see Paranormal Activity: The Marked Ones) After I, Frankenstein turned out to be a steaming turd (as expected), 20th Century Fox has shifted their Frankenstein nine months, moving it into an October date.

Starring James McAvoy as Viktor Von Frankenstein and Daniel Radcliffe as Igor, it will now hit theaters on October 2, 2015.