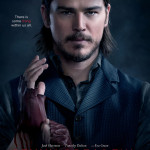 Created, written and executive produced by three-time Oscar nominee John Logan, “Penny Dreadful” has been embraced by the network’s subscribers, drawing 4.8 million weekly viewers across platforms since its launch. END_OF_DOCUMENT_TOKEN_TO_BE_REPLACED