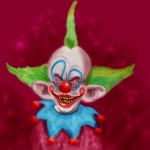 Nothing is quite as fun as a good hearted prank. Nothing, that is, except for a cruel, mean spirited prank that leaves the pranked with wet trousers. That exactly what we get in this aweomse killer clown prank that has been making it’s rounds on the internet.

Man, I really hope the internet never tires of seeing people make asses of themselves.

Here’s some fun facts about the prank.

This is by far the most difficult prank we have ever done.

– We used more than 30 liters of fake blood.
– We did an average of 1 scene every two days.
– We Spent more than 20 hours just waiting for victims.
– The Hammer weight is: 16 Kg.
– The guy at gas station pulled a knife but nobody noticed it until we revealed the prank. (you can see the knife the last 10 seconds of the video during the endcard)
– The guy at the metro tunnel ran so fast that nobody of us were able to catch it to reveal the prank, legend says he’s still running.
– At 0:55 the clown slipped and fell on the floor (you can hear the audio of that) unfortunately the camera was pointing the victim at that point.