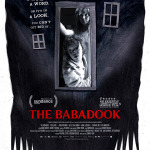 We’ve been dying to see The Babadook, for over a year now, and this Thanksgiving we’ll finally get our wish. In the meantime, we’re happy to bring you the new U.S. poster for the film, as well as a new, bone chilling clip!

The film about “a single mother, plagued by the violent death of her husband, battling with her son’s fear of a monster lurking in the house, but soon discovers a sinister presence all around her”, has been terrifying audiences since it’s debut at Sundance 2014.