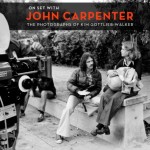 Now available for pre-order on Amazon is “On Set with John Carpenter”, a new book featuring never-before-seen photography from his classics including Halloween.

Explains the release: “As a hot new maverick director/writer John Carpenter invited photographer Kim Gottlieb-Walker onto the sets of some of his most iconic films: Halloween, Halloween II, The Fog, Christine and Escape From New York.

This book collects together the best of that on-set photography, accompanied by exclusive interview material with those involved, including key cast and crew.”

Kim Gottlieb-Walker’s photos have appeared in numerous magazines including Music World, Feature, Rolling Stone, Newsweek and People. She worked for Island Records, covering reggae performers all over Jamaica and shot the iconic High Times cover of Bob Marley. She has worked for over 40 years as a movie still photographer.