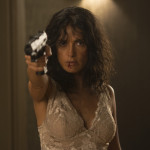 Wrong Turn 2 and Knights of Badassdom‘s Joe Lynch directs the tale of a woman (played by Salma Hayek) forced to take arms against a sea of assassins dispatched by her mob boss ex-husband.

Togo Igawa, Masashi Fujimoto and Hiroyuki Watanabe round out the key cast.

Bloody-Disgusting.com has posted a gallery of over 80 stills from the film.

“It’s Christmas time, but all is not well in the world of Everly (Salma Hayek). A call girl by trade, Everly has turned against her gangster boss Taiko (Hiroyuki Watanabe) and become a police informant. In response, Taiko has put out a hit on Everly and her family. Soon, every criminal in town wants to cash in. Everly’s survival instincts quickly kick in as she matches wits and firepower with Taiko and a seemingly endless stream of killers.”