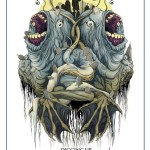 The film stars Ray Wise (Twin Peaks, X-Men First Class), Will Barratt (Frozen), and a roster full of horror genre favorites and iconic artists all appearing as themselves.

“When filmmaker Adam Green receives a package from a strange man (Ray Wise) claiming he can prove that monsters exist, he and his crew are taken on a mysterious, fantastical, and terrifying journey into the shadows deep down under the ground below our feet. Digging Up the Marrow is a documentary-style film that blends reality with fantasy in a way that will leave even the most hardcore skeptics believing in the existence of monsters.”

The “TOURING THROUGH THE MARROW” 2015 tour dates are in! Join writer/director/star Adam Green and artist/executive producer Alex Pardee for a one-of-a-kind special event as they bring DIGGING UP THE MARROW, an audience Q&A, an art exhibit of Alex Pardee’s original artwork that inspired the film, one of their favorite monsters from the film, and exclusive tour merchandise to the following cities:

DIGGING UP THE MARROW opens in Los Angeles at the Laemmle North Hollywood Cinema on Friday February 20th where it will run nightly for the next two weeks. It also hits Video On Demand everywhere that same day (including outlets such as iTunes, Amazon Instant Video, Xbox, Sony Playstation, VUDU, GooglePlay, and more). Tickets for the tour will go on-sale soon through each cinema directly. Information about VIP ticket options and the awesome merchandise secured by having a VIP ticket will be coming very soon.

And don’t fear… not only will the film theatrically expand to more cities during the week of March 12th (cities TBA), but more special engagement screenings and appearances will be announced soon! If you live in the USA there is absolutely a way to see this film in February whether it be on the tour, a special engagement, the theatrical release, or on VOD. And then…

The DVD and Blu-Ray (packed with special features) releases on March 24th and you can support the artists directly by pre-ordering your very own copy autographed by Adam Green right here.