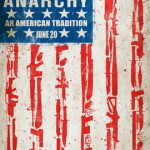 In The Purge: Breakout, it’s the annual Purge Night, when citizens across the country exercise their right of anarchy. Your group is being held captive END_OF_DOCUMENT_TOKEN_TO_BE_REPLACED