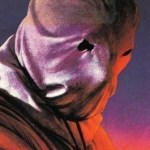 At this past weekend’s New York Comic-Con, Fangoria caught up with film, TV and comics scribe Roberto Aguirre-Sacasa, who promised that the Town That Dreaded Sundown remake he penned and that hits theaters this week has not toned things down.

“People who’ve seen it have said that it’s even more violent and disturbing than the original,” Aguirre-Sacasa (a former Fango intern) tells us. “It’s pretty hardcore; it’s a serious slasher movie.”

Opening this Thursday, October 16 from MGM under the newly revived Orion Pictures banner, Town is set in present-day Texarkana, where the 1977 Charles B. Pierce-directed Town, about the Phantom Killer who terrorized the area in the ’40s, is screened every Halloween. Aguirre-Sacasa’s story is told from the point of view of Jami (Addison Timlin), who survives the first in a series of attacks by a new Phantom. Bucking current trends, the writer says, there was no pressure to conform the mayhem to PG-13 levels.

BH Tilt, Blumhouse’s very new label created to distribute the production company’s distinctly not-wide-release titles is experimenting with just how they get their films out there. So far, it’s included unceremoniously bringing Stephen King adaptation Mercy, The Strangers, director Bryan Bertino’s Mockingbird, Joe Carnahan’s Stretch, and office thriller Not Safe For Work to iTunes this week. Up next is Alfonso Gomez-Rejon’s meta remake of the Charles B. Pierce 1976 oddball docudrama stalker The Town That Dreaded Sundown, which is already slated for premiere on premium movie channel EPIX.

Playing as part of EPIX’s “Dreadfest” this Halloween weekend alongside its predecessor, The Town That Dreaded Sundown 2014 will see a World Television Premiere this Halloween night at 9:30 p.m., and play multiple times throughout the weekend thereafter.