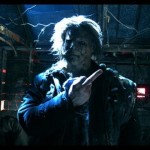 If you somehow enjoyed the Rob Zombie steaming pile of prequel/remake of the 1978 John Carpenter classic Halloween, you’ll probably be excited to know Halloween 3D has been rumored, confirmed, and announced. Sometimes reboots are awesome (Friday the 13th), sometimes they’re terrible (A Nightmare on Elm Street) and sometimes you’re force fed a big bag of doo doo. Sometimes, you just gotta eat the doo doo.

From HalloweenMovies.com: As you know, we do not comment on rumors regarding a Halloween film in any stage of production no matter how accurate or inaccurate they may be. However, over the past few months, we have been flooded with ton(s) of emails, tweets, facebook postings etc… regarding the status of next installment.

“As we stated before, we are dedicated to the fans of the Halloween series just as much as we are dedicated to delivering a film that we believe the fans deserve and will, most importantly, love. With that being said, we can confirm that a new installment of Halloween is indeed in on track and moving forward. We are currently developing a script, to finally bring Michael back to the theaters!”

More information will be released over the coming months and exclusively at Halloweenmovies.com. So make sure to follow us on Twitter and Facebook, so you can know first!