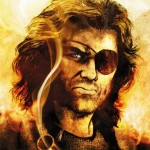 Ok, so it’s not horror news, but Kurt Russell news will get just as much attention here, until the day comes where I’m not the only one doing news.

After years in development and a trip to turnaround, Fox has emerged from competitive bidding and closed a deal to remake the 1981 John Carpenter-directed cult classic Escape From New York, Deadline was the first to report.

Carpenter will be an executive producer and will exert creative influence over the project.

They are starting from scratch with the hope to reinvent the property with an eye toward launching a new franchise.

Andrew Rona and Alex Heineman’s The Picture Company will produce.

“In the original, Kurt Russell played Snake Plissken, an eyepatch-sporting tough guy who is conscripted to rescue the president of the United States after Air Force One — en route to a summit that could head off WWIII — goes missing after it crashes in New York, which has been relegated to a maximum security prison. Plissken, a former special forces operative convicted of trying to rob the Federal Reserve, is given 22 hours to liberate the president and a tape he carries which holds the key to peace. If he fails, he’s wired to explode.“