A24 has announced a September 19, 2014 release for Kevin Smith’s Tusk, while also releasing a debut trailer at the San Diego Comic-Con.

Smith also released the first image (below) for the flick depicting the film’s antagonist (Justin Long) and protagonist (Michael Parks) in what looks to be an awkward conversation. END_OF_DOCUMENT_TOKEN_TO_BE_REPLACED 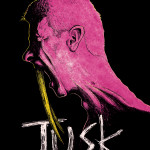 We’re all really excited about Kevin Smith’s newest venture into horror, with the film Tusk which follows a podcaster who sets out to interview an eccentric, reclusive old seafarer, only to find himself a plaything in the gruesome plot of a deranged killer. Today we bring you a new poster (left) for the film, done by Michael Scott Murphy. To say I NEED this is an understatement.